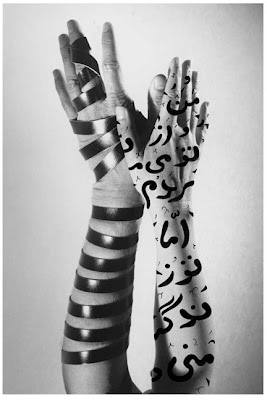 I'm not sure exactly why I decided to post the collaboration art piece I share a credit with Shirin Neshat, but here it is.
We both did it a few years ago, as a contribution for witness.org , an international human rights organization that give video cameras to people around the world in order to document human rights violations, and open the eyes of the world.
The project was produced by Alina Slonim, and directed creativly by another maverick artist, Izhar Patkin.
The spirit of the image is peace between Jews and Moslems.
I shot the image of the hands.
The male is wearing a "Tefillin", which is worn during the weekday morning prayer services of the Orthodox Jewish male as a sign and remembrance that God brought the "Children Of Israel" out of slavery in Egypt.
Shirin Neshat, who was born in Iran, did the Arabic calligraphy on the female's hand in my shot.
The image was printed as an edition of 100 , plus a few arists proof, and I believe that it is all sold out (or almost)
The money of the purchases went to witness.org , although some prints are sold in a second market of auction houses.
Posted by fuchsworld at 12:21 AM

I have been doing research on Shirin Neshat's photographs for two months now with absolutely no luck with finding translations of the arabic caligraphy she writes over her photos. How can this be?
-Frustrated in Denver

I'm going to contact the creative director of that collaboration, and will try to find out. You can also directly at rafael@rafaelfuchs.com

those caligraphy you find in her fotos are not arabic but persian and they are some part of poetry of iranian poem!

Thank you for the clarification !