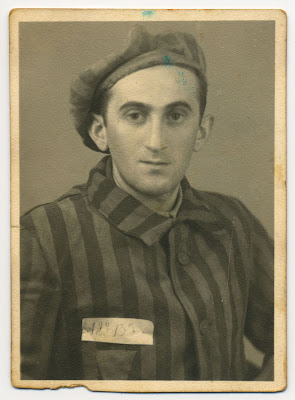 My daughter woke me up a few nights ago to a dream about my father.
He appeared in the dream as a photographer, who came to me with a glass plate of a negative he shot, and I offered to do a contact sheet of the plate.
It didn't surprise me (in the dream, as well as when I woke up), that he's a photographer...for some reason that I'm not sure of yet...
Although , in real life he was an electrician, who was installing electric structures in institutions and private homes in Tel Aviv, Israel, doing repairs for electronic items, and owned an electric supplies store (that was run by my mother).
The picture above was taken when he was sent to Buchenwald concentration camp in Poland by the Nazis.
He was prisoner #129135, and he was doing labor there for three years.
Out of 7 siblings only three remained alive after WW2.
Upon his capture, when my father was asked by the Nazis what his occupation was, he made up the story that he was an electrician, so they kept him alive.
He picked up the trade as he was going about it, and survived the medical experiments that were held in that camp.
My father and his brother, Zelig, escaped from the camp a few days before the American troops were approaching the area. http://www.holocaustresearchproject.org/othercamps/buchenwald.html
Posted by fuchsworld at 12:59 PM